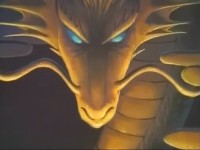 I Am An Outsider: Notes

I think I'm not meant to make drama videos. The timeline for making the video went something like this.

Late-90s: Think of the idea. Make a bunch of comedy videos before getting around to this one.
2002: Attempt to make the video. Run out of hard drive space while collecting clips with an older method. Give up.
2004: Make video, using a poor method that causes system to constantly run out of memory on export. Re-edit entire video. Video is outclassed by a zillion other drama videos that year.
2006: When finally cleaning up video for upload, hard drive with final project fails. Create version from backed up final export.

Anyway, I very rarely come up with ideas for drama videos that I want to do, but this one gave me an opportunity to do something that I often do in comedy videos. Take things out of context and distort them.

When I first saw Fushigi Yuugi, I felt that Nakago was just about the most evil character I'd seen. A lot of bad guys are powerful, but Nakago is a lying, conniving, backstabbing SOB. So I had the idea to make a video sympathising with him. Not because I feel he deserves sympathy, but because I thought it would be something interesting to try.

In the final episode of Fushigi Yuugi, when Nakago is killed, there is a flashback to his youth. He is holding his mother's hand, when some people offscreen speak.

This discrimination based on race brought to mind the PWEI song "Ich Bin Ein Auslander", written "to communicate and stimulate anger at racism". So I thought I'd take all of the footage where the Suzaku Seishi ("good guys") beat on the Seiryuu Seishi ("bad guys", including Nakago), and all of the footage where the Seiryuu are downtrodden. No footage of the Seiryuu fighting back, or initiating the fight in the first place, as they are wont to do. Also, Miaka is portrayed as the "silent assenter", who does nothing in the face of the implied injustice.

I also used some of the "generic attack" footage and tried to insinuate that it is Suzaku attacking Seiryuu, and twisted the meaning of some footage.