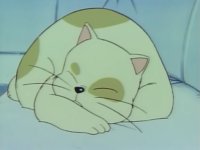 KOR is not used that often in AMVs, nor is Shonen Knife. There aren't too many character profiles featuring animals either, so that makes this video eXtra original! (haha)

Just a fun video idea I had a while back. That's it.

Contains liberal amounts of the clip (ie: box) effect, as seen in the show itself. I used it a lot, but it never bothered me, so meh.